St Irenaeus of Lyons is the first great theologian of the undivided Church by virtue of the scope and depths of his theological vision and giving expression in the West to the theological tradition he had learned in the East. Relatively little is known of his life; most important is his connection, through St. Polycarp of Smyrna, to St John the Evangelist: in a letter, part of which has been preserved by Eusebius in his Ecclesiastical History, Irenaeus recounts how as a youth he had sat at the feet of Polycarp, etching into his heart all that Polycarp recounted about his own association with John and expounding all things in harmony with the Scriptures. 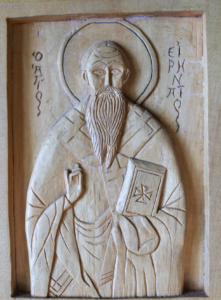 At some point, Irenaeus made his way Westward, perhaps accompanying Polycarp on his visit to Rome in 154/5, and then to Gaul, where he seems initially to have been the leader of the Christian community in Vienne. When a fierce persecution of Christians in the region erupted in 177, he acted as an ambassador of peace by taking a letter from the confessors of Vienne and Lyons to Eleutherius of Rome, where the Christian communities seem to have been troubled by reverberations from a new prophetic movement in Asia and Phrygia, led by Montanus. While he was away, Pothinus, the elderly bishop of Lyons, was martyred; it was probably when Irenaeus returned that he became the leader of the larger Christian community in Lyons. Irenaeus sent at least two further letters to Rome, the first to Victor of Rome, warning him about Florinus, a fellow disciple of Polycarp, who seems to have been attracted to the teaching of Marcion and then that of Valentinus. The second letter to Victor, sent around 190 AD, again urged peace, this time with regard to the different practices for celebrating Pascha, with Irenaeus commenting: ‘the difference in practice confirms our unity of faith’. Tradition records that St Irenaeus died as a martyr; his feast days is celebrated on 23 August (in the West it is 28 June).

Although Eusebius records that Irenaeus wrote a number of works, only two have survived: first, the vast treatise, in five books, called Refutation and Overthrowal of Falsely-Called Knowledge, or more commonly, Against the Heresies. , and, second, rediscovered only in the early twentieth century, The Demonstration of the Apostolic Preaching. He is the first writer to use as Scripture almost all the writings that now form the New Testament, to appeal to the Rule or Canon of Truth as a criterion for theological reflection, to give a full account of apostolic succession and tradition, and to provide a full account, on these bases, of the economy that leads from Adam to Christ. His theology is characterized by its emphasis on unity: the work of the one God, through the one Christ by the one Spirit in the one economy accustoms the one human race to bear the Spirit in Christ and so ascend to God. Irenaeus expounds his unity by way of the idea of ‘recapitulation’: that of the Scriptures (the Old Testament) in the Gospel, which in turn proclaims how Christ recapitulates Adam (and Mary recapitulates Eve), undoing, in reverse parallel, the errors of the former, so as to bring the human being to salvation in God. In these ways, God is continually at work in creation, bringing his handiwork, fashioned from mud, to share in his own life as his glory, for, according to Irenaeus, ‘the glory of God is the living human being, and the life of the human being is to see God.’

Excerpt from St Irenaeus’ Against the Heresies

How then will you be a god, when you are not yet made human? How perfect, when only recently begun? How immortal, when in mortal nature you did not obey the Creator? It is necessary for you first to hold the rank of human, and then to participate in the glory of God. For you do not create God, but God creates you. If, then, you are the work of God, await the Hand of God, who does everything at the appropriate time, the appropriate time for you, who are being made. Offer to him your heart, soft and pliable, and retain the shape with which the Fashioner shaped you, having in yourself his Water, lest you turn dry and lose the imprint of his fingers. By guarding this conformation, you will ascend to perfection; the mud in you will be concealed by the art of God. his Hand created your substance; it will gild you, inside and out, with pure gold and silver, and so adorn you that the King himself will desire your beauty. But if, becoming hardened, you reject His art and being ungrateful towards him, because he made you a human being, ungrateful, that is, towards God, you have lost at once both his art and life. For to create is the characteristic of the goodness of God; to be created is characteristic of the nature of the human. If, therefore, you offer to him what is yours, that is, faith in him and subjection, you will receive his art and become a perfect work of God. But if you do not believe in him, and flee from his Hands, the cause of imperfection will be in you who did not obey, and not in him who called you. For he sent messengers to call people to the feast; but those who did not obey deprived themselves of his royal banquet. (cf. Matt. 22:3)